How to Achieve Sustainable Development for Valve Enterprises 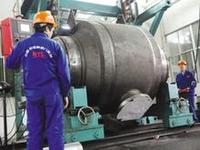 At present, some valve factories are successful but do not know how to succeed specifically, the reason for which,at the large level ,is caused by opportunism.Its leaders succeed in earning the first  fortune by accident of  their good understanding, sensitivity coupled with strong courage.But now the probability of such a successful way like this will only get more and more low. Also therefore, many enterprises began to show solicitude for the self-development.of a strategic brand
In the trail of the brand's survival and development, the inertia thinking of the ordinary people are still in the level where we need to preserve, put in a lot of effort and exert more effort. Indeed, from the goods into a commodity until establishing a brand is a complicated process, which takes a generation or even several generations trials and hardships.
Thus it can be seen that whether merger,reorganization and others reflect strong capital strength or dramatic changes. By forcing businesses to learn how to survive,many valve companies should reflect themselves, plan precisely with clear goals and spend much time and energy on how to walk out a road that belongs to myself in the cruel market competition.Thus the resource integration including restructuring mergers, building a alliance, and many kinds of ways, Jeasin valve thinks that it can often shorten the path to guide into the brand.
Nowaday, most of the valve company in China are in such a condition as small scale,the small number of economic activities, relatively simple operating management of the enterprise,and poor anti-risk capability. Many of enterprises have been established for a short time, and is still in the primitive accumulation stage of capital owners. However,Large enterprises have already implemented fully division and realized the standardization, generalized management and humanistic management to quickly create wealth. The small valve companies still take survival as the principal thing, which fully embodies the characteristics of  subsistence economy.
Confronted with the current economic crisis and the increasingly fierce market competition, the valve enterprises are in sore need of the guidance from a real marketing expert to conduct the targeted plan according to the current problems faced with the enterprises, what are the enterprises in need of? Which problems from the propaganda, development, competition, market are badly in need of being resolved, which has to be clear. The planning object determines the contents of the plan. Be sure to match. Therefore, Jeasin valve considers that only by adjusting our own structural characteristics, repositioning,establishing priority brands with market power and industry chain power, and completing its own value-laden profit in the valve industry ecosystem according to our own innovation and efforts,can we achieve sustainable development.
Previous News: Why Attach Much Importance to the Flange Leakage
Next News: The New System Pushes the Valve Technology toward a Higher Level