The New System Pushes the Valve Technology toward a Higher Level 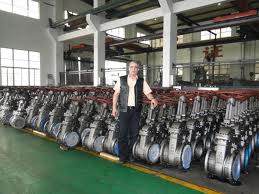 China's valve industry has developed for several decades, during when time  the valve standard has also been considerable development. With the restructuring pace of the valve industry accelerating , the future industry will be the technological innovation of products , product quality safety and product brand competition. The product will develop towards high technology, high parameter, resistance to corrosion, and long life.

However, the product technology content and appearance design of the valve industry is still the emphasis and difficulty of the development. At present,the domestic valve products have been able to meet their own needs, thus it appears more necessary to expand exports and broaden the market.

At present, the total annual demand of China's valve market is no less than 10 billion RMB. According to the scientific outlook on development, China must give priority to infrastructure construction such as water, electricity, gas, and heat so as to ensure the future economic-coordinated development and improve people's life,which is really ample scope for the abilities of valves. That is to say, China's valve market ,as a newly-built instead of replacement , whoes potential demand and explosiveness will be staggering.


In 2012, the total import-export volume of China's valve industry reached $24.1 billion, up 28.2%  year-on-year , Of which the total exports amounted to $22.4 billion, up 29.3% year-on-year ; the total imports volume to $20.134 billion, up 27%. As the world economy pick up, China's valve products have also increased in the import and export . By 2015, China's valve market will have been more 10% than the United States market , and three times larger than Japanese market. Buyers will buy $2.4 billion worth of valves. By 2015, three of the top ten buyers and six of the top twenty will have been emerged in Asia.

And we should continue to make full use of the existing standard while looking into the future, working out a new standard and a  new system that can be used for futhure development so as to push the valve technology toward a higher level,and continuously improve the level and grade of valve products. Believe that China valve industry will present a better development prospect in the vast demand environment.
Previous News: How to Achieve Sustainable Development for Valve Enterprises
Next News: Volkswagen Valve Made a Good Start in the New Year