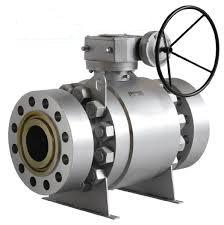 1.Easy operation: The sphere is supported by the upper and lower bearings,which reduces friction and eliminates excessive torque caused by the enormous sealing loads created by the inlet pressure pushing the ball and sealing socket.
2.Reliable sealing performance: PTFE single material seal ring is embedded in the stainless steel valve seat.The spring set in the end of metal valve seat ensures a sealing ring has enough preload. When the sealing surface is abraded in the course of using trunnion-mounted ball valve, it continues to keep good sealing performance under the role of the spring.
3.Fire structure: In order to prevent PTFE sealing ring from being burned,occurring large leakage and fueling fire behavior for the appearance of sock heating or fire, the fireproofing sealing ring is arranged between in the ball and valve seat. when the sealing ring is burned, under the action of the spring, the valve socket and sealing ring are quickly pushed to the sphere and form metal-to-metal seal. Fire-proof test meets the requirements of APl 6FA and APl 607 standard.
4.Automatic decompression function:When the medium pressure stagnating in the valve cavity rises abnormally over the preload force of the spring, the seat falls back from the sphere to achieve the effect of automatic decompression,and automatically recover after pressure relief.


5.Drain pipingline: Drain holes is set on the body, which can check whether the leakage happens to the seat or not.When the valve is fully opened or closed at work, the packing is directly replaced through removing the pressure in the chamber.